The Arnold Strongman Classic is an annual competition featuring strength athletes from all over the world. Created by Arnold Schwarzenegger and Jim Lorimer, it is an offshoot of the Arnold Sports Festival which takes place annually in Columbus, OH. Instead of focusing on endurance, speed and athleticism like the World’s Strongest Man, the competition is geared toward the heaviest instruments in the world to find out who truly is the strongest man. 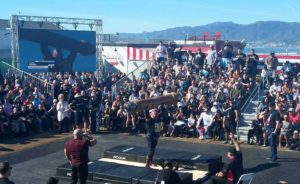 In addition to ten of the world’s strongest powerlifters competing against each other, firefighters from around the state had their own version of the strongman events to find “The World’s Strongest Firefighter.” The competitors were cheered on and encouraged by the seven-time Mr. Olympia winner himself, Arnold Schwarzenegger.

Spectators enjoyed several other celebrity sightings, such as Sofia Vergara and husband Joe Manganiello, along with watching the powerlifters beat incredible feats such as deadlifting 950 pounds and pulling an antique firetruck down the Pier deck. Read more about the day’s festivities in The Argonaut.