The Marvin Braude Bike Trail is a 22-mile paved bicycle path that runs right behind the Santa Monica Pier, connecting Santa Monica to other beach-side cities by trail.

The northern part of the Marvin Braude Bike Trail begins at Will Rogers State Beach in the Pacific Palisades, just a few miles north of the Santa Monica Pier. The trail then winds south on the California coast through sunny Santa Monica and Venice beach. Once it hits Washington Blvd, it turns slightly east and inland to snake around the inlets of Marina del Rey, and again joins with the beach along the Pacific Ocean at Playa del Rey. The trail continues south through Dockweiler State Beach, Manhattan Beach, Hermosa and Redondo Beach. It’s ending point is at the Torrance County Beach.

The Marvin Braude Bike Trail was paved in the late 1980s and officially named in 2006 for Los Angeles City Councilman Marvin Braude. Braude is known for protecting the open space of the Santa Monica Mountains and served on the council for 32 years. He passed away in December of 2005.

The northern part of the trail underwent construction towards the end of 2019, expanding the width of the path to make for safer use and mobility for cyclists and pedestrians. The majority of the path has separate bike and pedestrian lanes, but riders should always keep an eye out for walkers, runners and skaters along the way. It is a relatively safe path, only intersecting with vehicles and traffic lights for a few miles around the Marina.

The Marvin Braude Bike Trail is a great way to experience the Southern California coastline. If you have your own bike and begin in Santa Monica, head down the California incline to begin your journey. If you want to rent a bike for the day or a few hours, check out Blazing Saddles bike rentals and tours on the Santa Monica Pier. Take the trail less than two miles south of the Santa Monica Pier and explore Venice Beach, the infamous Venice boardwalk and Muscle Beach, and the Venice canals. It takes about 15 minutes to bike from Santa Monica to Venice. Spend the rest of your day leisurely riding along the calm south bay and grab a bite to eat the Redondo Beach Pier before turning back north to return to Santa Monica. 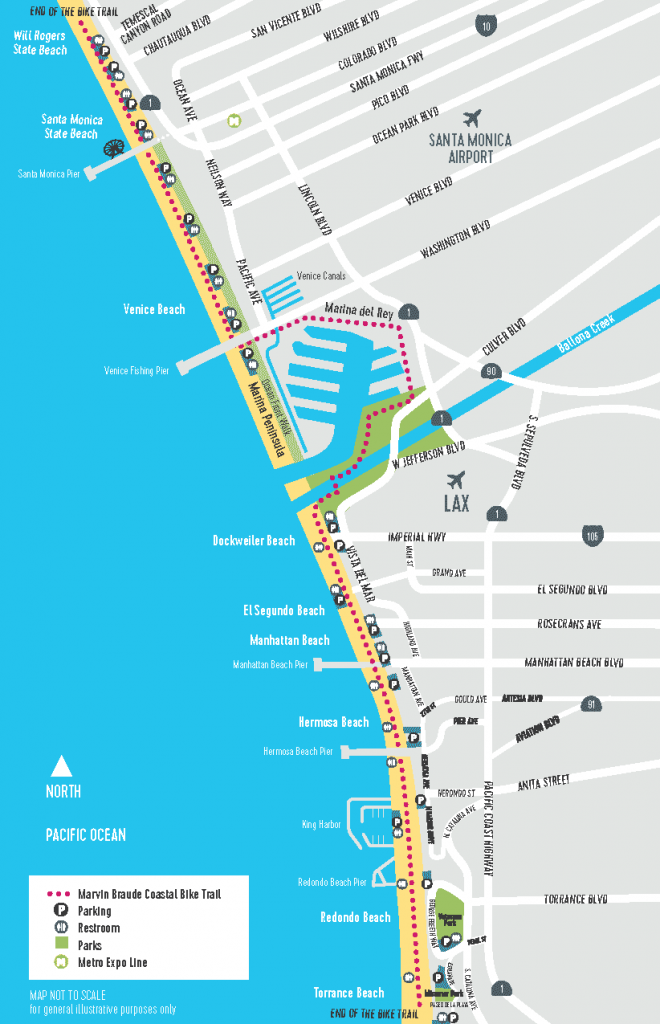 Best Places to Have a Kid's Birthday Party in Santa Monica
Pacific Park Salutes the Dodgers Win at the 2020 World Series
American Foundation for Suicide Prevention Hosts Annual Out of the Darkness Community Walk at the Sa...