Last year Novak Djokovic won in the Men’s Singles, and Naomi Osaka’s won at the Women’s Singles. This year’s top three seeds for the men’s section are Novak Djokovic, Rafael Nadal, and Rodger Federer, with a very little surprise. The women’s top seeds are Simona Halep, Angelique Kerber, and Caroline Wozniacki. This year will be the farewell performance of future Hall-of-Famer and Grand Slam title holder Wozniacki.

The tournament starts on Monday 20th January 2020 and runs until Sunday 2nd February 2020.

Due to the massive time zone difference between the United States and Australia, viewers in the United States will actually watch the games a day before the official date we mentioned. The games are scheduled to start at either 11 AM or 7 PM, for the most part, so here’s a little example of how these times translate between Australia and the US.

Where is the Australian Open 2020 held?

The tournament is held at Melbourne Park in Melbourne, Australia.

How to watch and live stream the Australian Open

ESPN and the Tennis Channel will be broadcasting matches from this year’s Australian Open. For streaming, look for ESPN and Tennis Channel on streaming platforms Hulu and YouTube TV.

Last year, the Tennis Channel partnered with One World Trade to put the colors of the Australian Flag on the spire of New York’s tallest edifice. Tennis legend Rod Laver had the honors of lighting the spire on live TV all the way from Melbourne. 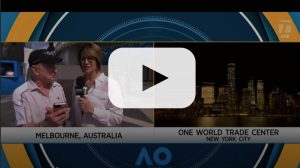 This year’s opening celebration will include a custom light program on the Pacific Wheel in Santa Monica, CA. The lights can be seen from Santa Monica’s famous beaches or viewed online at Pacific Park’s live webcams.

Pacific Park on the Santa Monica Pier lights the Ferris wheel lights from time to time in partnership with other groups and organizations to promote and bring awareness to special events like this year’s Australian Open. This is the first time the Ferris wheel is being lit to promote an international sporting event. The Ferris wheel’s 174,000 led lights are programed and animations are created frame-by-frame using the Ferris wheel’s custom light program. The world’s only solar powered Ferris wheel, the Pacific Wheel displays nightly programs and regularly featured in local news broadcasts, film and television.