The Twilight Concert Series at the Santa Monica Pier had been celebrated on the West Coast for over 35 years. While Twilight on the Pier isn’t looking like it will be returning to the pier, the Santa Monica Pier Corporation hosts other events that produce local music performances for Santa Monicans. Join us for Local’s Night on the Santa Monica Pier every third Thursday of the month for a curated series for locals, by locals. Gather your friends and family and head down to the Pier for amazing entertainment including youth activities, a car show, local DJs and live music from local bands, art exhibits, and so much more!

The 2020 Twilight on the Pier series was scheduled to begin Wednesday, August 19th. Unfortunately, due to state-wide restrictions on events and gatherings implemented to limit the spread of COVID-19, Twilight on the Pier was canceled. This summer would have marked the 35th installment of the much-loved West side tradition. To celebrate the Twilight Concerts, we are sharing some history of the series, as well as some photos and playlists. 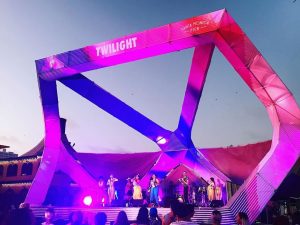 The Twilight Concert Series at the Santa Monica Pier had been one of Los Angeles’s most loved free, outdoor music festivals for over 30 years.

The Twilight Concert Series was an annual showcase of live musical performances held over several evenings each summer on the Santa Monica Pier. The Series began in 1985 and has previously been known as the Twilight Dance Series, Twilight Concert Series, and is now known simply as Twilight on the Pier. The concerts have featured a diverse lineup of award-winning and up-and-coming musical acts including Earth Wind and Fire, Mavis Staples, George Clinton and many, many more. Several of the performers have returned more than once, always sharing stories of the unique stage looking out at kids zooming by on the Pacific Park roller coaster and Pacific Ocean beyond.

Twilight has not always been a top-billed music festival with corporate sponsors, VIP cues surrounded by acres of beach blankets. The summer concerts had a humble beginning in 1985 when a group of enthusiastic Santa Monica business owners organized the first-ever Twilight Dance Series, as the event was originally known. The Santa Monica Pier had fallen into disrepair after neglect, winter storms, and even fire threatened the Pier’s viability as a utility and destination. The Twilight Dance Series was part of a herculean effort to not only save the aging Pier, but to remind people how important the Pier was to the identity of Santa Monica.

Where are the Twilight Concerts?

Santa Monica’s long-running Twilight Concert Series took place ON the world-famous Santa Monica Pier. There is a main stage located on the Pier’s main parking deck located behind the Pier restaurants Rusty’s, the Albright, and Seaside. An additional stage and performance area is located at the far, western end of the Pier past Mariasol’s. Additionally, artists and other interactive entertainment will be located throughout the 7-acre pier. There are no bands or music on the beach.

What could I expect at Twilight on the Pier?

Each night of the Twilight Concert Series highlights the music and art of one country or cultural group. From Pop and Indie Rock to Japanese Vibes, the series focuses on one group at a time so that each visit to Twilight will promise an all-new experience. Once you arrive at the Pier, you will want to pass through one of the security check points (food, towels, and beach chairs OK – no open container alcohol permitted on the public areas of the Pier). Listen to the world-class acts performing on the main stage located in the upper deck between 7 and 10 PM. Between sets there, walk out to the west end of the Pier where DJs and performance acts will entertain Pier-goers. On your way back to the main stage, be sure to check out the art and artists stationed along the Pier’s boardwalk as well as the rides and games inside Pacific Park (no admission fee, of course), try a quick bite from one of the Pier’s many restaurants or beer from the Twilight Beer Garden.

Could I bring food, drink, or picnic items during the concert series?

On concert evenings, there are security checks at all Pier entrances. Normal beach items including waters and snacks are allowed. No weapons, knives, wheeled carts, bikes or anything the security personal could construe as a weapon or obstruction are allowed. Picnics are permitted, but dining at one of the Pier’s many restaurants is encouraged.

How do I get to the Twilight Concerts on the Santa Monica Pier?

Concert parking can be tricky as many folks head to the beach after work and streets around the Pier can become congested between 3 and 8 PM. We strongly recommend taking the Metro: the Expo line drops you off at 4th and Ocean – a quick 10-minute walk from the Pier deck. If you must drive, plan to arrive early (before 4 PM) to take advantage of available parking. You can enjoy your time before the concert grabbing an early dinner or enjoying the rides at Pacific Park. For driving directions to the Pier, check out pacpark.com/directions.

If you park north or south of the Pier and walk, bike, or scoot to the Pier, head to the “back” of the Pier located at 1600 Ocean Front Walk (across from Big Dean’s Ocean Front Cafe). You can access the Pier by the stairs and ramps behind the Carousel Building.

If you park at 3rd Street Promenade, the Civic Center garage, take Metro or are walking, biking, scooting from Downtown Santa Monica, take the Pier Bridge ramp down to the boardwalk from Ocean and Colorado. The security check point is at the bottom of the ramp, so please plan accordingly.

In / Outs are permitted and this is a non-ticketed event.

Where do I park for the Santa Monica Pier Twilight Concerts?

If you absolutely must drive, point your GPS to 1550 Appian Way. This will take you to Lot 1 North, right next to the Pier. This city-owned parking lot has increased rates on event nights and you may be asked to pay $25 or more, so we recommend driving to the Civic Center Parking Structure at 333 Civic Center Dr. (corner of Olympic Drive and 4th Street). This is a 12-15 minute walk across Tongva Park to the Pier boardwalk. For more directions and parking tips, check out our guide to Parking at the Santa Monica Pier.

Where do I go once I arrive in Santa Monica to experience Twilight?

All of the Twilight festivities take place on the Pier. On concert nights there are 3 security check points where you can enter the Pier:

Once through security, the rest of the Pier is open for you to enjoy. Headlining acts perform on the main stage behind the Rusty’s and the Albright. You can enter this area through the “artists installations” between to the parking gate house and police substation across from Bubba Gump.

Why is the beach closed during the Twilight Concert Series?

The beach is not closed, but there are no Twilight Concerts on the beach. In years past when the concerts would get close to capacity, people would spill out onto the sand to hang out. Due to problems with littering and use of glass bottles and containers on the beach, this is no longer encouraged. Come up on the Pier and enjoy this free musical and artistic event with the rest of the Santa Monica community.

What Happened to the Twilight Concerts on the Beach in Santa Monica?

What is different about Twilight on the Pier?

Twilight on the Pier not only focuses on the bands playing on the main stage but on artists and other performers including those from dance, comedy, visual arts, and other forms of artistic expression. Twilight on the Pier has been compared to “an art walk over the water” although there are no galleries. The art, music, and experiences are happening all over the Pier, inside the restaurants, amusement park, and along the storied boardwalks over the Pacific. Twilight on the Pier seeks to bring people out of the crowd and into the experience that is the Santa Monica Pier.