There is an unlikely connection between Ferris wheels and the annual Valentine’s Dayholiday that most people don’t know about. Cupid’s holiday happens to also fall on the birthday of the man who invented the Ferris Wheel, George Washington Gale Ferris Jr. He was born on February 14th, 1859, and debuted the first ever Ferris Wheel in 1893 at the Chicago World’s Columbian Exposition.

The American Civil Engineer built the first Ferris Wheel as a great structure that would be more impressive than the Eiffel Tower. His initial proposal to the planners was deemed unsafe, and was almost never built because of this roadblock. Despite initial denials, Ferris Jr’s love for the project drove him to persist and get the support of established engineers, and $400,000 from local investors to complete the project.

The first Ferris Wheel had capacity for 2,160 people, with 36 cars able to accommodate 60 people each.

When the Fair opened, it carried approximately 38,000 visitors every day, and carried 2.5 million passengers in total during the 13 years in operation. In 2013, Google honored Ferris Jr. with a doodle on February 14th, surprising users who expected a Valentine’s Day Theme.

We Love Our Ferris Wheel

With Santa Monica being a popular destination for couples on Valentine’s Day, it’s no surprise that many of them flock to ride the Pacific Wheel Ferris Wheel with their loved one on February 14th – something they’d be unable to do without George Washington Gale Ferris Jr.’s invention over 125 years ago. 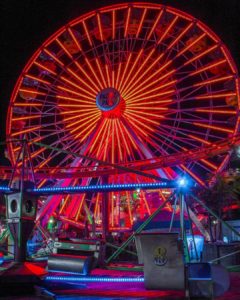 Since then, Ferris Wheel technology has improved significantly. The success of the first Ferris Wheel has spurred the creation of nearly 100 other notable Wheels around the globe. Here in Santa Monica, we feature the world’s only solar-powered Ferris Wheel – with a light show made to impress.

We told you that Santa Monica is a popular destination for couple’s on Valentine’s Day – so it’s never too early to start planning your trip. Start planning your hotel room, dinner reservations – and ride on the Pacific Wheel today!