×
There are no New Year’s Eve events at the Santa Monica Pier for 2022. There are no fireworks in Santa Monica. Pacific Park on the Santa Monica Pier is open 365 days a year. On Friday, December 31, the rides will operate from 11 AM – 9 PM. The Pier will close as scheduled at 10 PM. Pacific Park will present a New Year’s Eve countdown on the Pacific Wheel – this will be viewable from the beach and Ocean Front Walk south of the pier, Palisades Park, and online. Click to learn more about our virtual countdown to 2022.

The Park’s operating hours vary by season and may change due to inclement weather or special events. Prior to visiting, be sure to check online at www.pacpark.com/hours or call (310) 260-8744 ext 0 for the current operating schedule. 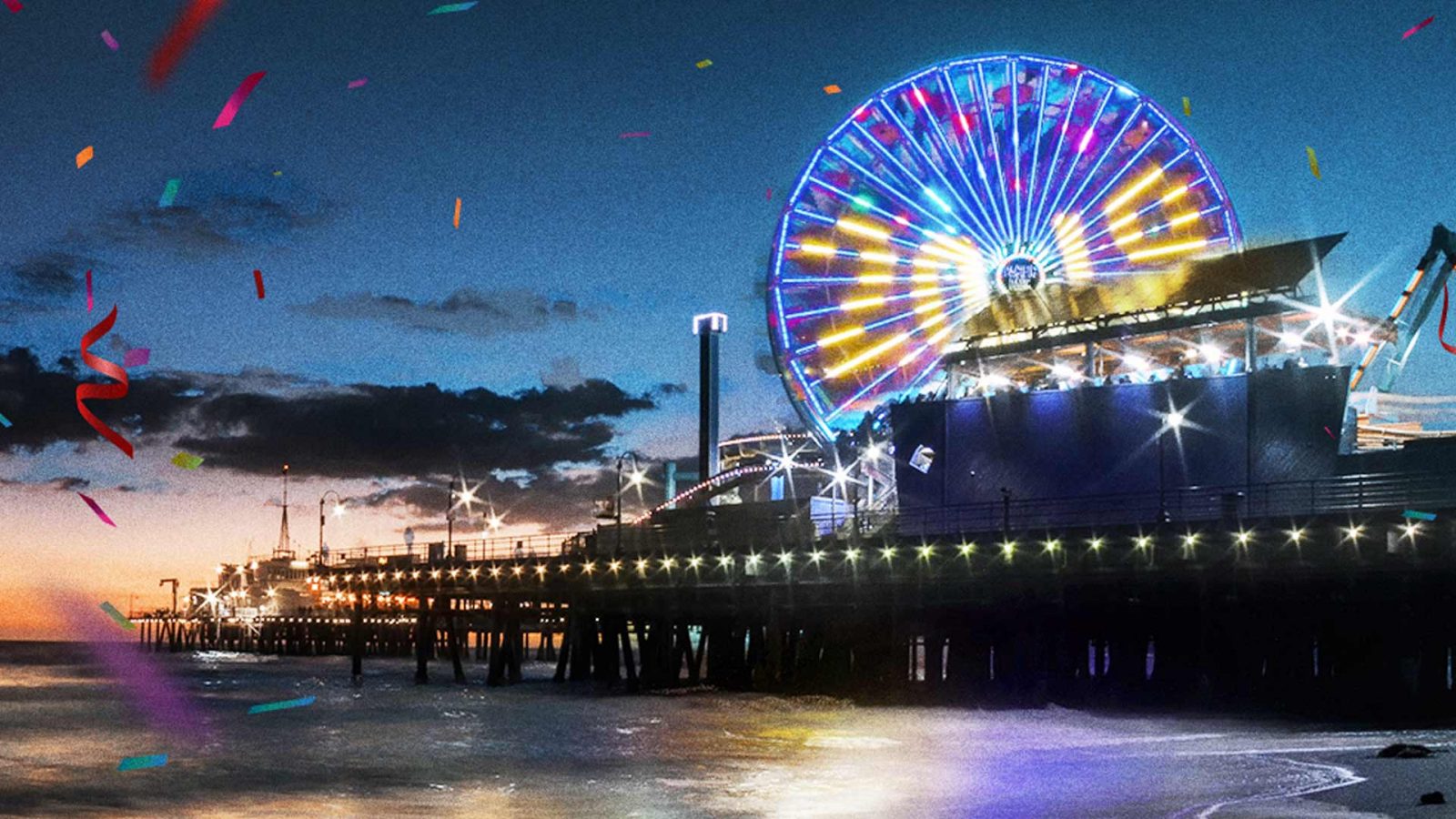 At the close of each year, Pacific Park hosts the West Coast’s biggest countdown to the the New Year with a giant numerical countdown displayed on the world-famous Pacific Wheel on the Santa Monica Pier.

Where can you watch the New Year’s Eve Countdown on the West Coast?

New York may have the ball drop in Times Square, but for the 55 million Americans living in the Pacific Time Zone, the only way to countdown the New Year is by watching the huge electronic display on Pacific Park’s Ferris wheel shining brightly over the lapping waves of the Pacific Ocean at Santa Monica State Beach. New Year’s has been celebrated at the Pier for decades, and before Pacific Park installed it’s live-streaming live cams, this West Side tradition was a bit of a well-kept secret in Los Angeles for those who prefer the wide-open beaches in Santa Monica over a crowded parking lot downtown or pricey night club in Hollywood.

Each year, Pacific Park’s event team designs and programs a 30-plus minute light program that features brilliant colors, high-energy designs, and some fun Easter eggs from the previous year before displaying giant animated numerals counting down the final 60 seconds of the year. The Pacific Wheel’s custom LED lighting package features over 174,000 points of light that can display over a million different colors at 24-frames-per-second. The brilliant display can be seen from the beaches south of the Pier, Palisades Park on Ocean Ave, or from the Pier itself. The Pier and Pacific Park are free to enter; there is no admission fee to come see the light program.

Several hotels in Santa Monica offer select suites with exclusive views of the Ferris wheel and make a great destination to celebrate New Year’s Eve in their own private space. The Loews Hotel Santa Monica has hosted Telemundo’s live broadcast event of the countdown from their Sunset Suite; the largest suite at the Loews Hotel Santa Monica. This luxurious room offers front-row access to stunning views of the ocean and the beach, a spacious sundeck with its own fire pit, a wet bar and a dining area for six. On the top floor of Shutters on the Beach, you can stay in the Beach House positioned just above the sand with nothing between you and the horizon except a couple of gently swaying palm trees.

Getting to Santa Monica for the Countdown

A great way to get to Santa Monica on New Year’s to see the countdown is by way of the LA Metro Expo Line. The train drops riders off right in downtown Santa Monica at 4th and Colorado, just a 10-minute walk from the Pier and Beach. The Metro is often FREE on holidays like New Year’s to encourage partiers from being tempted to drive. Ride share services can also drop you off next to the beach or at the top of the Pier ramp at 1550 Ocean Ave in Santa Monica. The parking lot on the Pier deck is usually closed on holidays so it’s best to point your GPS to 1550 Appian way to reach Lot 1 North next to the Pier if you need your car nearby. We encourage guests to take advantage of Metro’s convenient service to the West Side.

Livestream the Countdown on any Device

If you can’t make it to Santa Monica on New Year’s Eve, consider streaming the countdown at your own New Year’s Party from Pacific Park’s live-streaming webcams. The Wheel cameras provides a full-frame view of the Pacific Wheel’s west-face. Behind the Wheel you can see the twinkling lights of Santa Monica and Ocean Park. There may be a slight delay on what you see on your computer or device depending on the speed of your internet connecting; most viewers report a 10-25 second delay. The live stream, also featured on many broadcast news stations, does not include audio, so you will need to provide your own sound track.

Despite many, many claims on other website and even in some news broadcasts, there is not, nor has there ever been fireworks at the Santa Monica Pier on New Year’s Eve. The Pier is over 100 years old and the 1,000-foot boardwalk is made from wood. The Santa Monica Fire Department strongly discourages any type of fireworks or pyrotechnics on the Pier; you aren’t even allowed to smoke a cigarette on the Pier much less fire off rockets. However, neighboring community Marina del Rey located just a few miles south of the Santa Monica Pier has a beach-front firework display that can be seen from the Pier when the weather cooperates. Sometimes in the winter, Southern California Beaches can be covered in a dense fog or marine layer rendering views of the distant fireworks impossible.

So whether you are planning to head out on New Year’s Eve looking for a place to party with like-minded Angelenos, want to live-large by booking a palatial hotel suite for you and you closest friends, or are planning a soirée at home, we hope you enjoy Pacific Park’s New Year’s Eve Countdown on the Pacific Wheel.